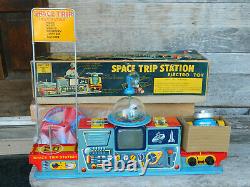 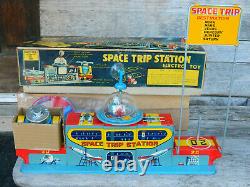 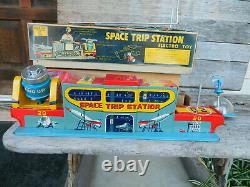 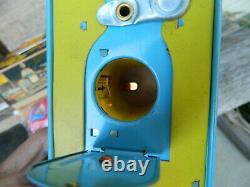 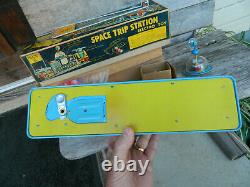 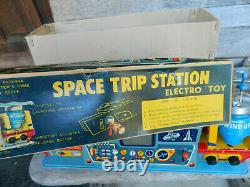 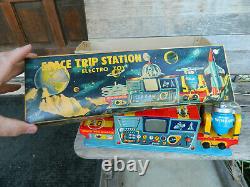 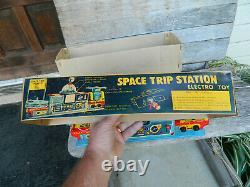 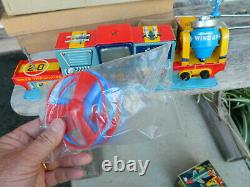 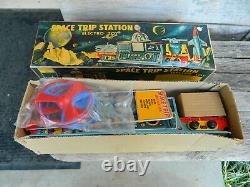 This comes from the estate of a long time collector. I'm not personally familiar with. These types of toys, so you know more than I do. As far as condition, the box has damage, but still has awesome graphics.

The toy itself, looks to be never played with. The bag that holds the satellites. Has been opened, so maybe someone tried it once, not sure. I have not put a. Battery in it, for fear of damaging it.

The information below is from the internet, and better describes the toy than i could ever. But if you have any questions, please ask, and I'll try and answer thanks.

Scarce, unusual battery operated tin litho "Space Trip Station, Electro Toy"; complete, and all original. Comes with rare original box. The condition of the toy; near mint. It appears to have never been played with.

The front is beautifully lithographed to resemble the controls of an operating space station including embossed dials, gauges and buttons. The on/off lever has its original red ball cap. When switched on the television screen illuminates with moving images of rockets, planets, and stars. At the same time the tinplate astronaut underneath the dome revolves, while every few seconds a "beep" sound is emitted. It uses a single D-cell battery. The blue radar antenna above the astronauts dome is all original and flawless. Looking at it head on, the right side of the station includes a metal wind-up mechanism for launching the plastic "satellites" (two blue and two red).

The button closest to the right edge tilts the winder forward or back. Slightly turning the other button launches the wound satellite.

Two additional satellites are stored below the metal Space Trip Destination sign on the left. The view of the rear of the station was lithoed to look like an air terminal with a hanger underneath. Crowds of people can be seen on the upper section while below rockets are being set to launch.

A saucer can be seen inside the hanger. Both the Yonezawa and Tomiyama marks were also printed on the box. The front cover is illustrated in full color with an accurate rendition of the station on an extra-terrestrial surface. Rockets, planets, and the Earth can be seen against a black-blue starry background.

Front and rear aprons show another drawing of the station, smaller, but no less detailed. Launching directions are included in the lower right corner.

The short side panels have a great image of a flying saucer with windows. An astronaut family waves to them as it passes. Size: 14½" long, 3" wide, 7" tall (top of radar dish), 11½" tall (top of Destination sign).

The seller is "purplecropper" and is located in Modesto, California. This item can be shipped to United States, Canada, Mexico, Bermuda.